Trip with Pat Condon on board Osprey II out of Crosshaven. The emphasis was definitely on an afternoon out and a bit of craic with a group from work.
The forecast for Friday was very iffy with moderate to fresh westerly winds- there was talk of deferring but we decided to give it a go. we brought along frozen mackerel as a backup in case we couldn't catch our own bait.


We started out with a couple of drifts between the forts and on the turbot bank to see if there were any mackerel. One solitary one was caught, plus some small codling. We then moved onto the harbour rock and had a couple of drifts there, picking up some nice pollock, and a few smaller fish, but still no mackerel.

We anchored up in the hope of a conger. The lads I was with were on rod hire so Pat fixed them up with some conger traces he had handy. Pat set out a baited pirk on his own rod and sure enough this one got a bite. Pat was busy sorting out a tangle so one of the other lads brought it in- a conger of a bout 12lb, and the best fish boated of the day.

After that the dogs came on the feed so we decided to move. At was also pretty lumpy at this point a lot of roll. we knew that going out of the harbour was not an option.

We headed back into the inner harbour and spent the last hour over a muddy area. Here there were plenty of mackerel so we were able to catch any amount that we wanted for the bbq later that night. A couple of herring were landed here too but no other fish. I had a two down trace looking for flatties and I had the dubious honour of pulling in a shore crab and an edible crab on successive drifts. We finished up at 19.30

An enjoyable afternoon out and definitely a decent result given the conditions. We are very lucky to have the harbour- a trip out of anywhere else would have been cancelled due to the wind.
Again Pat Condon did a great job, he was especially helpful to the non anglers in the group. Hopefully the next trip will have better weather 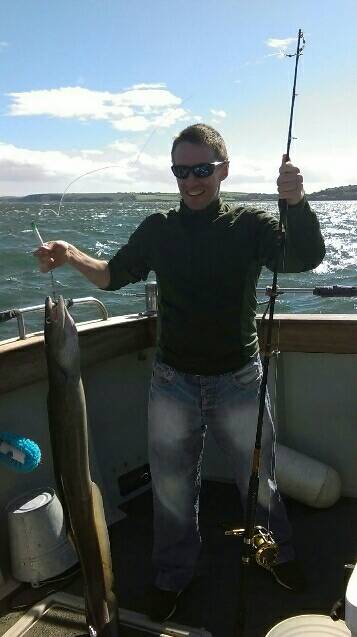