Headed out with the two boys and a neighbour Colin, who has returned to fishing on the occasion of his retirement

Dropped anchor at Rosturk House and was pleasantly surprised to dig up around 40 lugs and the occasional maddie in about 30 minutes - many hands make light work and all that. Beach seems to be relatively calm in terms of digging - not any sign of recent activity. Lo and behold it appears to be recovering... water draining into it was the colour of boiled tea so with that in mind we headed off for the flat rocks west of Mulranny far from any stream.

It is a bit of a slog for those who know it and a bit of a scramble, and the flat rocks were horribly slippery from the fresh water leaching down off the cliffs but we managed to get to our wrasse holes without upset. Colin even brought a deck chair. It wasn't deck chair weather, 12 C, very overcast, but no chop with the wind (light) in the west and vering north. This is a very exposed mark and does not bear consideration except in the calmest and driest of conditions and/or wind not in the south west. 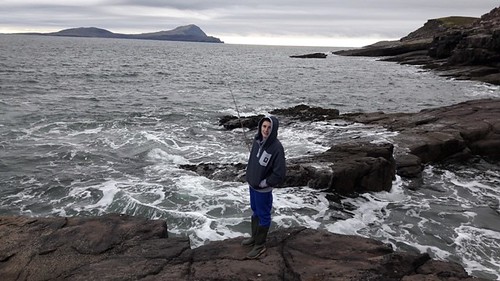 BTW we'd been trying to find a few seats on a charter but the Clew Bay Skate Festival was on, so there wasn't a boat to be had in Mayo and all the boats in Sligo were fully booked. Anyone hear what size of a skate won?

Set up our stall at about 2 pm with HW due around 7 pm. Simple one hook wrasse rigs, trying out these cheaper than chips Chinese size 2 circle hooks. More on that anon.
I tried some shop bought mackerel - why do I do this? Never again... and whilst the cooked prawn has worked well for me in the past, the raw stuff was a disaster.

Put lug on the boys traces and sooner than you could say "Fish ON", we had two rods bending under the strain from under their feet in the surge. 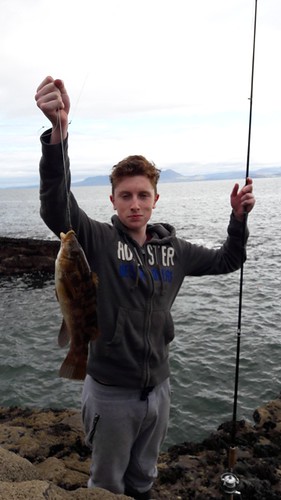 Eoin was first in with one of three very decent ballen wrasse, the best reaching a decent and very fat 46 cms, probably tipping 5 lbs in old money (2.2 kilos).

He landed two more in the low 40s and finished with 14 fish, all on the circle hooks. Really do like how they almost always catch the fish in the scissors, only had to go in with the sniped nose pliers on one greedy wrasse that had sucked it well in. This particular fish put up a tremendous fight - we were all using light spinning gear, given I had lots of soft plastics with me in expectation of some Pollack fishing in the Wrasse were not hungry. And as I was unhooking it, the circle hook snapped on a big flap. Cheaper than chips but not sure about the quality and not sure I will be bringing them to the Danish Cellar if we go hunting specimens with crab before the season ends. 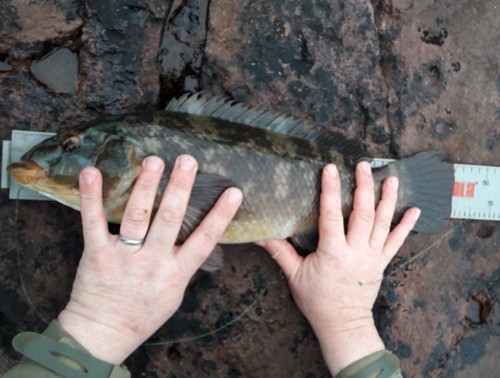 Next up was Cathal who was fishing a few yards away and could not get away from corkwing wrasse. Seriously it was ridiculous, if I hadn't been unhooking and releasing and rebaiting myself I would swear he was just dipping the same fish in and out!

In due course I got them to unhook and rebait themselves. And you know they way you warn them about the spines in the dorsal fin of wrasse, and you show them how to handle them, and you tell them it will not be funny... well it was hilarious! 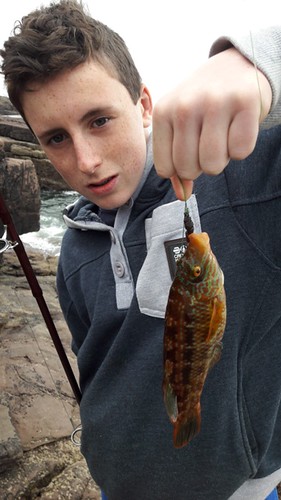 Just in case our friend from Minnesota is up and around, here's some detail (slightly out of focus sorry) on beautiful marks on a male corkwing wrasse: - 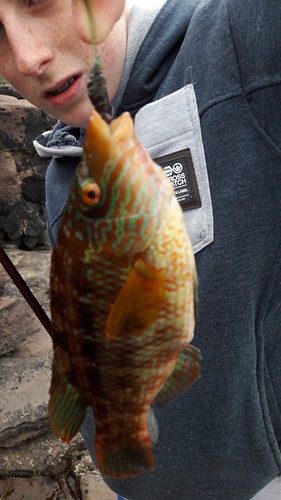 No rock cooks or gold shinny either, and I was checking all the small wrasse coming in...

Colin - after a slow start - then pulled in a small Pollack on a string of feathers fished slow and low around the white water boils. He was having untold problems with a reel, which is what happens when you return to fishing after *coughs* years (or even a few months in my case!). A switch to a spinning reel sorted this quickly. He then proceeded to take some nice ballen wrasse from the same boils using small sand eel imitation plastic, fishing just a yard behind a small ball lead. 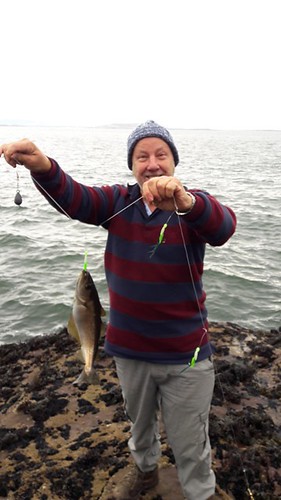 At this stage I had yet to wet a line, and the count was probably well past 20 fish. Cathal started landing ballens and that please him no end. He took the lead 9:7 in his newly announced competition with the older brother. (Seriously was I ever this bad with my brothers? If I was, well feck me!) I put a big bait out at distance but had forgotten about a dreaded razon sharp reef about 40 metres straight out and lost a good fish to it.

Meanwhile the boys were delighting in their hooping rods... and we were making serious inroads into our supply of lugworm.

The fishing seemed to die off quite a bit around mid to high water, which was a surprise. Even moving further into the guilies didn't work.

Colin added another Pollack and Eoin and Cathal were swapping the lead with their own wrasse competition. I finally landed a small corkwing and yes, another. Towards 5 pm, the fishing picked up again and I landed a 41 cm female ballen wrasse. It had been noticeable that some of the lunker ballens had been nipping at the caught corkwings on the way up. My only decent ballen had a sizable lump missing from its tail fin. At the death, I landed what I thought was a small ballen but on reflection (given the bright blue spots on the tail) was probably a specimen female corkwing and then added a small Pollack for a total of 5 five. Colin finished on the same mark.

the light was fading fast by now and we were packing up one rod at a time.

As for the competition, it ended 14:10 to the older lad, much to the disgust of his younger brother! Bribery in the form of cod and chips from the Blue Dolphin was required. Its at the back of the Topaz garage in Newport every Sunday, but its sold out by 9 pm. Now if only you could get cod from the shore in Mayo!

Great day out, boys delighted with themselves, and it didn't rain once! What more can you say...

PS: Sean, I still have your ugly stik in the garage. If you don't collect it soon one of the lads might appropriate it!!!
lucky13

As you say; a cracking session with some fine wrasse. I'm hoping for at least one more go at the wrasse myself as it's a good time for a few bigger ones.
kieran

turns out there are only specimen weights on cuckoo and ballens and the ballens is just 4.75 lbs in old money.
reckon we chucked a few specimens back ...

anyone used the soft crabs you can buy frozen in asian markets for fishing? Just a thought...
joe the junior

well done lads, that hole is full of those corkwings! as for the skate festival, a new record was broken since 1913, Sean Fahy had a skate of 222lbs another skate of 214lb was also landed. both fish were caught from a Newport based charter boat!
kieran

Have you ever fished further west - It would take a bit of a slog around the headland and require finding another way down but its looks pretty good... ?
MinnesotaAngler10

Great report and day of fishing! That male corkwing wrasse is a beaut! Stay safe during the storm